Home
Anime
Top 10 Best Fairy Anime Series [Recommendations]
The creatures we think of when we think of fairies come straight out of Northern European lore. But much like knights, that hasn’t stopped Japan from incorporating them into anime. Fairies show up all over the place in anime nowadays, in all different forms. And while there are only a handful of anime that are really about fairies exclusively, they feature prominently in a number of others.

Here are 10 of the best anime in which fairies take center stage – at least for a while. In Shugo Chara, Amu Hinamori makes a wish to be more like her ideal self. She is shy and easily intimidated in reality, but somehow has a reputation for being cool and aloof.

After making the wish, she finds three eggs in her bed the following morning. They all hatch into a “guardian character,” each of them representing an ideal form of herself. Their primary role is to give advice and encouragement, but in a pinch, can also temporarily change Amu’s demeanor and abilities.

The strike here is that the “guardian characters” are not referred to as “fairies,” per se. But they’re magical little human-like creatures that follow around the main character and help her with magic. Hard to get more fairy-like than that. 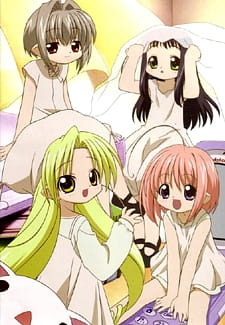 This is actually a series that truly is just about fairies. In this case, it’s about 4 fairies who come to Earth to learn about the human world.

They each live in bottles on the desk of their “sensei,” and find themselves getting terribly misguided life advice from him and his grade-schooler neighbor.

There isn’t much to the overall plot, it’s pretty much just a PG-rated sitcom about four cute little fairies trying to learn how to become human, and misunderstanding it in the most amusing and adorable way possible. 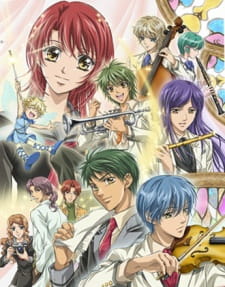 Okay, so realistically, this is about music. You should be able to tell that much just from the image.

But the basis of the show has fairy all over it. Hino Kahoko has no particular musical talent, you see. She attends the non-music branch of what is apparently a very prestigious music school.

But what the fairy, Lili, does here is provide Hino with a magical violin. That violin allows her to play beautifully and flawlessly, as long as she believes she can do it. It’s true that the majority of the series is about the cute musician boys eventually vying for Hino’s heart, but Lili maintains a central role throughout. 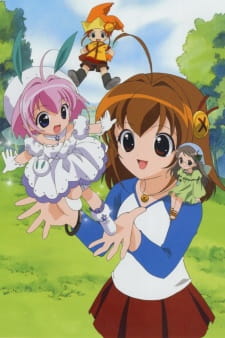 The “Season Fairies” take center stage here. Anything having to do with weather – wind blowing, rain falling, sun shining – is something these fairies control through their magic musical instruments.

To do that, they must find “Twinkles,” that make the fairies’ magical flowers bloom. Problem is, none of them have any idea what a Twinkle is.

In Amagi Brilliant Park, a brilliant high-school student is tasked with revitalizing a run-down amusement park. And it isn’t just any old amusement park – almost all of the park’s employees are supernatural creatures.

These creatures feed off the positive energy of people having fun, so you could basically call them “fun fairies.” That said, they’re decidedly not fairy-like in appearance, as many of them look like they could be right out of a Ghibli movie.