2B is a 6-star unit that plays the Physical Damage role. Her stats are great having a good HP pool and ATK stat.

Let’s start by being honest and flat out saying, 2B maybe the best unit out of the Neir unit’s that are released. There are quite a few Physical Damage characters but she definitely stands out in terms of usability.

The biggest thing to note on 2B is one of her attacks is a randomizer with random effects tacked onto it. Fish being the risky due to its 50% chance to instant KO the caster.

R050: Spear and A150: Vault is two of her better moves to use because of how much they can do. When used alone they are decent damaging moves with secondary effects.

But when used after Pod Charge they deal more damage and get additional secondary effects. Pod Charge itself is a good move from its Auto-Revive purpose.

Her Traits are just as helpful as her skills giving her good stat buffs, chances to avoid different kinds of damage, and having an auto heal. All of these put together when in use are extremely helpful and makes 2B play very nicely.

Verdict: A great 6 star that and amazing attacker. A definite yes to anyone that asks about using her.

2B is neutral to all elements and status ailments.

A unit of the YoRHa soldiers, a group from a faraway world made up of androids. This all-purpose combat model is capable of short-range sword attacks, and is also equipped with a “pod” sub system which allows for long-ranged attacks. YoRHa soldiers do not have names, and are instead called by their code number. Though these androids are prohibited by rule to hold emotions, 2B is comparatively the most calm and collected. Her proper name is YoRHa No. 2 Type B. 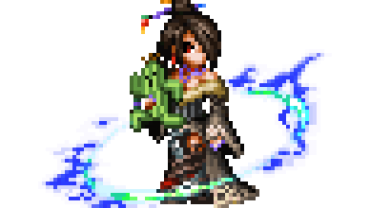