Adam is a 6-star unit that plays the Physical Damage role. He’s similar to Eve in some respects because of the basic set up of his skills and their stats are very similar as well.

The big difference between the two is Eve is more focused on taking damage and getting that Meaningless World trait buff. Where as Adam is more about decreasing damage done to him to be alive longer to deal more damage.

Adam’s main focus will be around his attacks Damage Cut and Bullet Wave. Both decreasing damage by 50% for one turn but Bullet Wave also dealing damage at the same time.

His Traits are set up perfectly giving him all the right buffs to balance out his role. Getting buffs to all his major stats, a 30% HP increase, a chance to negate damage, and like Eve, being able to get a major 150% buff to all stats from Raw Feelings

Getting Adam to 5% health is not the main goal for this character cause he can deal decent damage with out it but it does help majorly. With his purpose of reducing damage and being able to stay alive for long periods of time and adding the chance for Raw Feelings to activate, it’s a great boost to have on this character.

Verdict: A good Physical Damage character and made better with his Raw Feelings trait

Adam is neutral to all elements and status ailments.

Adam can equip 2 weapons and 5 armor.

A mysterious machine lifeform from a faraway world. He was born from an amalgamation of machine lifeforms that were living in a desert area. He was different from any machine seen before, with long silver hair, and the body of a young man. Though calm and intellectual, his purpose was of the utmost cruel and vindictive qualities. Little of him is known other than the fact that he travels around with his look-alike younger brother, Eve. 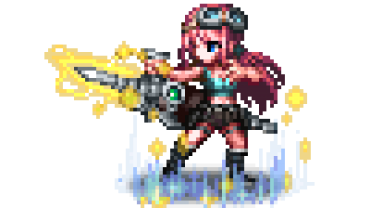