Danganronpa is awesome. And if you haven’t played the first two games, play them and stop reading this. There will be spoilers for the first two games, because part of the game is just figuring out who survives. And this anime picks up right from the end of the second.

That could be the whole review, honestly. All you really need to know is that Danganronpa is an excellent series on every level, and is worth the time of anyone who has it to give.

But we’ll go more into it for the sake of not wasting your time.

Danganronpa is, at its core, a visual novel series produced by Japanese game developer Spike Chunsoft. And that means something very interesting – what is airing right now is a sequel to a pair of visual novels available on Steam and Playstation Vita. That is to say, the anime is the sequel to the games.

Not an adaptation – the anime is the actual sequel. 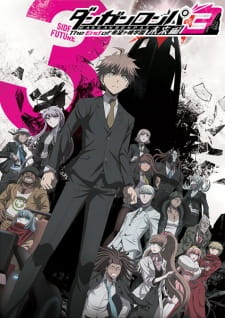 The first Danganronpa was the story of Makoto Naegi, who was accepted to the presitigious Hope’s Peak Academy. This is a school with such a high reputation, everybody who graduates is basically guaranteed a life of limitless success.

Naturally, admission isn’t easy. Every one of the students at Hope’s Peak is the best at something. Each of them is referred to as an “Ultimate” something-or-other. Or if you’re taking the literal translation (which appears to the the direction localization company Funimation is taking), a “Super High-School Level” something or other.

It doesn’t really matter what the ability is, as long as they show prodigious skill with it. There’s all kinds of skills involved, from a baseball player to a gambler to a writer to a fashionista. Even a top-tier gang leader and morals committee leader are there.

And then there’s Makoto. His skill is that he’s lucky. And the proof of him being lucky is that he won a lottery in which Hope’s Peak chooses one student to attend at random. But aside from that, he doesn’t stand out in any way. Yet he ends up (SPOILERS INCOMING) solving the mystery of Hope’s Peak Academy and defeating the leader of the organization that put them there.

Danganronpa 3 is a strange animal, because it is actually two different, concurrently running series with direct ties to the games. A sequel series, dubbed the “Future Arc,” picks up from the exact end point of Danganronpa 2, but follows the characters from the first game as they try to save the world from despair.

However, there is also a prequel series, known as the “Despair Arc,” in which the characters from Danganronpa 2 are shown prior to the events of the game. These series are running at the same time, with episodes being released on Funimation a few days apart from each other. 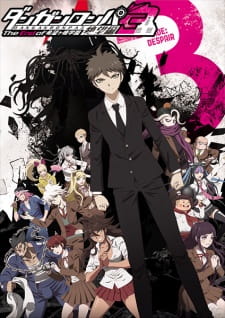 And so far, the episodes seem to be interacting with one another, despite them taking place years apart. It’s a little hard to explain. But in the first episode of the Future Arc, we’re introduced to a new character – who is immediately the first to die.

Then the Despair Arc episode comes in and features her as the main character, after the character herself does a little opening monologue about how it sucks that she died.

Now, this is standard anime stuff, normally, but in Danganronpa, everything is a potential plot element, so this could be a throwaway scene, or it could come back to be a huge deal later on. The first game had one of the most mind-blowing sequences of plot twists in recent memory, and then the second game matched it by hiding some of the best red herrings I’ve ever seen.

Danganronpa 2, in particular, proved that the game’s writer knows exactly how its players think, and how they try to predict and outsmart the plot. He baits the hook with some subtle foreshadowing, then yanks the rug away as all your theories crumble apart.

Now, in Danganronpa 3,  anything is possible. Just in the first episode of each arc, mind-bending twists have come about. There are at least two characters that have showed up that, based on the first two games, should not exist. So the distance from start to “WTF is going on” is less than one episode.

Of course, it’s impossible to talk about this series without talking about the TV adaptation of the first Danganronpa game. That series does everything it can to squeeze the convoluted plot of Danganronpa into 12 episodes, but there is a lot missing. 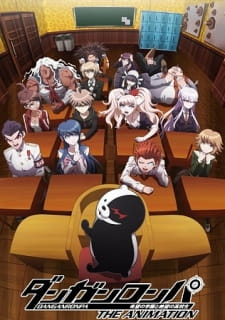 A lot of time was spent trying to preserve the unique style of the game, even incorporating a number of the UI elements from the game into the anime. That’s a neat effect, but felt a little forced.

Danganronpa 3 obviously doesn’t have those restrictions, and is free to tell its story in its own way. From the very first episode, the pacing feels better because this is an original series written for its length, rather than a 30-hour story trying to fit into 5.

But then, that raises another problem. If you’re an anime enthusiast who has no interest in playing the Danganronpa games, there’s a good chance this series holds no value for you. None. Zero.

It is very clear that the series is intended to pick up from the previous games, and it has no interest in spending time bringing you up to speed on the story thus far. The Despair Arc does, at least, spend an episode introducing you to new characters (the cast of DR2), so that might be better as a standalone. But ultimately, the world of Danganronpa is a deep, intertwined tale that is best experienced with a full knowledge of the backstory.

If you’re a fan, this looks like it’s going to be a great ride. If you’re not… either check out the visual novels. They’re one of the better pieces of fiction you’ll find this decade.