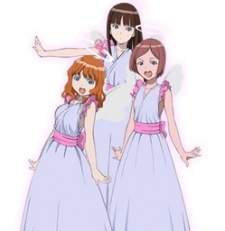 Type: TV
Genres: Drama
Start Date:
End Date:
Episodes:
Age Rating: -
Angel ScandyS is a comedy about three normal girls, three demons, and three angels, trying to become idols. So just why are angels and demons trying to become idols? It's because a certain man's soul got double booked for heaven and hell due to a system error! This man was the Principal of Lilliard Music School, the school that's produced countless stars. As soon as he died, the evil chairman of the board took over the school. The original Principal won’t rest in peace without taking his school back. So he is refusing to go to heaven or hell! The angels and demons don't know what to do, until the Principal says that he will give his soul to whoever does more to help him take back his school. The angels and demons are interested in becoming idols to begin with, so they gladly accepted! Now the angels and demons are going through idol training on Earth! (Source: Crunchyroll)