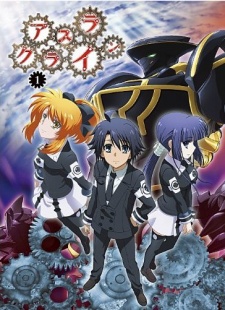 Type: TV
Genres: Supernatural, Mecha, Action
Start Date: 2009-04-02
End Date: 2009-06-25
Episodes: 13
Episode Length: 24 min
Total Length: 312 min
Age Rating: PG - Teens 13 or older
Natsume Tomoharu is a normal high-school student in every way with one exception: he's being followed by the ghost of his best friend, Misao. After moving into his brother's old house, Tomoharu expects to continue living his normal life but is one day left with a mysterious and locked briefcase without any instruction. At first he plans to leave it in storage; however, his house is soon invaded by multiple groups of people after the briefcase. Although still not knowing the purpose of the briefcase, Tomoharu and Misao attempt to escape with it. From there on, Tomoharu tries to learn the secrets behind the briefcase, the connections between it and Misao, and why it has the power to change the world. [Written by MAL Rewrite]