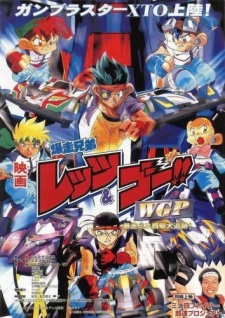 Type: movie
Genres: Sports, Cars, Adventure
Start Date: 1997-07-05
End Date: 1997-07-05
Episodes: 1
Episode Length: 80 min
Total Length: 80 min
Age Rating: G - All Ages
Rion gets tricked into installing a chip into his racing car called "Gun Bluster" by the mini-4wd company he was associated with. His car starts racing without control and causing various riots with fellow racers, Rion teams up with the TRF Victorys and start chasing after Gun Bluster to remove the chip. Rion, Retsu and Go Seiba along with the other TRF members, Ryo Takaba with the help of his little brother, Jiromaru, Tokichi and J are confroted with an association that is also after Gun Bluster, but what are their intentions? United along-side their trademark mini-4wd, the TRF's and Rion race together and avoid traps to safelly capture Gun Bluster!