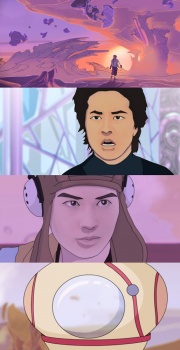 Type: movie
Genres: Sci-Fi, Adventure
Start Date: 2009-04-28
End Date: 2009-09-27
Episodes: 3
Episode Length: 20 min
Total Length: 60 min
Age Rating: PG - Teens 13 or older
Project to mark Yokohama City's 150th anniversary. On Planet Abel, humans and robots co-exist. One day a mysterious stowaway on a transport vessel tries to invade the planet, but is discovered by Apollo (Hayato Ichihara), a robot that looks like a human; and Mikaru (Aya Ueto), a human that looks like a robot. The stowaway had in his possession a memory chip containing the latest in camouflage software, the mysterious "Cipher" OS. Apollo takes the Cipher chip simply for fun, but has no idea what he's getting himself into. He suddenly starts acting strange, but Mikaru has no idea what's wrong or that Cipher is behind it. What exactly is Cipher? What sort of secrets does it hold? Apollo and Mikaru will unravel a mystery encompassing the past, present, and future to find out. (Source: Nippon Cinema)