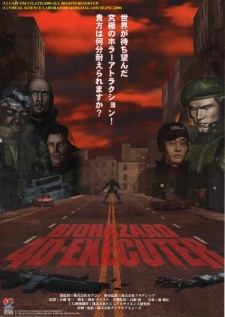 Type: special
Genres: Military, Horror, Action, Zombies, Adventure
Start Date: 2000-01-01
End Date: 2000-01-01
Episodes: 1
Episode Length: 20 min
Total Length: 20 min
Age Rating: R - 17+ (violence & profanity)
Biohazard 4D Executor was a 20 minute CG movie that people in Japan could (and still can as of this date) see in a special theatre. Though the CG was primitive, (the rendering and models aren’t much better than that seen in Resident Evil 2, it’s certainly not on par with Resident Evil 3) it told the story enough. Below is a summary of the events within the 20 minute movie. The story focuses on an elite unit of 5 UBCS members, sent into Raccoon City to try and rescue Dr. Cameron. An Umbrella scientist lost in all the confusion. The UBCS team, consisting of members Rodrigo, Roger, Klaus, Ed and Norman, have a GPS device used to track down Dr. Cameron’s last known location, which is near a large food factory. Upon entering the factory they are attacked by a large creature, a sort of hybrid between a Tyrant and the more evolved forms of Nemesis. (Source: rehorror.net)