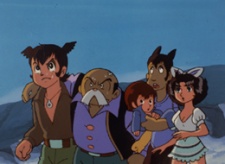 Type: special
Genres: Kids, Adventure
Start Date: 1981-08-23
End Date: 1981-08-23
Episodes: 1
Episode Length: 90 min
Total Length: 90 min
Age Rating: G - All Ages
TV anime created as a part of "24-Hour Television". Since 1978, Japanese TV network NTV has been doing charity event "24-Hour Television" every summer. Tezuka Production created anime specials for the event under the supervision of Osamu Tezuka. "Bremen 4: Jigoku no Naka no Tenshi-tachi" was produced for the 1981 event. Its title means "Bremen 4: Angels in Hell" in English. The story is, similar to the Bremen Town Musicians fairy tale by Brothers Grimm, about four animals, Coda the cat, Alegro the dog, Largo the donkey and Minuet the chicken. They save Rondo the alien who is on a peace mission. In return Rondo gives them a machine which can transform them into humans. Turned into their new form as humans, they go to the town, where they see the madness of war. (Source: AniDB)