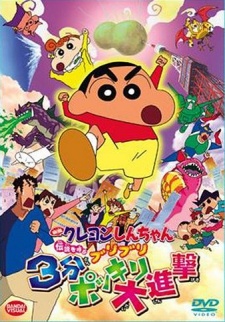 Type: movie
Genres: Comedy, School, Kids, Slice of Life, Ecchi
Start Date: 2005-04-16
End Date: 2005-04-16
Episodes: 1
Episode Length: 88 min
Total Length: 88 min
Age Rating: G - All Ages
An action comedy including parodies of tokusatsu monster/hero genre, such as "Godzilla" and "Ultraman". A time-space conditioner from the future, Miraiman, suddenly appears before the Nohara family, and he requests the family to fight against giant monsters who appear from time-space distortion one after another, in order to save the world from destruction. Every time monsters appear, Shinnosuke's parents, father Hiroshi and mother Misae go to the world three minute later, transform themselves into righteous heroes and defeat them within the time limit of three minutes. Hiroshi and Misae become wrapped up in getting rid of monsters, and Misae stops doing the housework. Then, a strong monster appears, and he cannot be defeated within three minutes. Shinnosuke rises up against the monster. (Source: Manabu Tsuribe)