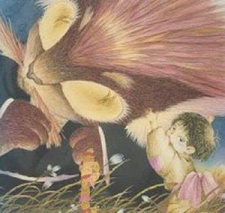 Type: OVA
Genres: Drama
Start Date: 1988-09-30
End Date: 1988-09-30
Episodes: 1
Episode Length: 25 min
Total Length: 25 min
Age Rating: - None
The Acorns and the Wildcat is a unique short film in picture-book format from the creator of Night on the Galactic Railroad and Gauche the Cellist. Unusually for an anime, a narrator reads Kenji's story aloud while the action is played out on the screen by a succession of warm and evocative illustrations brought to life by subtle touches of animation. If the film feels somehow familiar yet you can't put your finger on the reason why, it's probably the sumptuously minimalist animation by Yasuhiro Nagura, who was the animation director of Mamoru Oshii's artsy 1986 feature Angel's Egg. That, and Kenji's wildcat is said to have been the inspiration for Miyazaki's Panda/Totoro creature. The idea of reading Kenji's story aloud instead of playing it out as a drama is quite refreshing, and Kenji's magical language and narrative style are entirely sufficient to sustain interest. Combined with the spacey music and breathtaking art, the result is a pleasantly unassuming little gem of a film. (Source: pelleas.net)