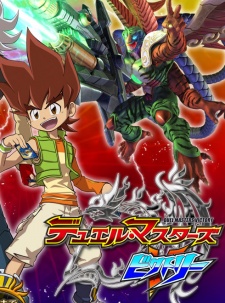 Type: TV
Genres: Comedy, Game, Action, Adventure
Start Date: 2011-04-02
End Date: 2012-03-31
Episodes: 52
Episode Length: 10 min
Total Length: 520 min
Age Rating: PG - Teens 13 or older
Duel Masters Victory is the 7th season of the Duel Masters Anime series. As shown in Episode 32 of Duel Masters Versus, this storyline follows the events of the Duel Masters: Star Cross manga instead of Cross Shock. It introduces a new protagonist named Katta Kirifuda, the brother of Shobu. He wants to be a dueling champion like his brother Shobu, but in his own way. The series shows the beginning of his dueling adventures with his friends, Bucyake, Yohdel and Benchan. During these adventures he considers Dragon Ryu a fierce duelist as his rival. This series also features the story behind the battle between the races of Hunters and Aliens. (Source: Duel Masters Wikia)