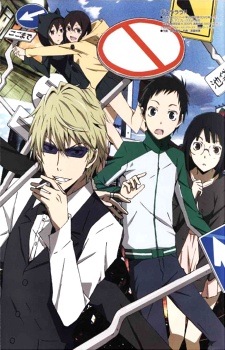 Type: special
Genres: Comedy, Supernatural, Action
Start Date: 2010-08-25
End Date: 2011-02-23
Episodes: 2
Episode Length: 23 min
Total Length: 46 min
Age Rating: R - 17+ (violence & profanity)
Celty Sturluson is tasked to deliver a suspicious red handbag as part of her courier duties—the problem is: it is being sought by several organizations. As she makes her way through Ikebukuro toward the place the bag is supposed to be brought to, she is chased by mysterious men speaking a foreign language, and her package ends up dragging many of the city's residents into the conflict. Subsequently, famous actor Yuuhei Hanejima has just arrived in Ikebukuro as part of a special TV program, searching for the best couple to give them a chance to appear in one of his movies. However, Yuuhei Hanejima is actually a stage name for Kasuka Heiwajima, Shizuo's younger brother, and when an anonymous internet user threatens to kill the superstar, this user learns the weight of what that relationship means. Moreover, Shizuo discovers that the one responsible for the attempted attack is the meddlesome pest that he loathes with a burning passion. [Written by MAL Rewrite]