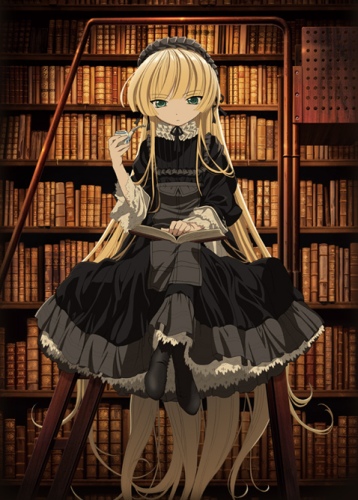 Type: TV
Genres: Mystery, Historical, Drama, Romance
Start Date: 2011-01-08
End Date: 2011-07-02
Episodes: 24
Episode Length: 24 min
Total Length: 576 min
Age Rating: R - 17+ (violence & profanity)
Kazuya Kujou is a foreign student at Saint Marguerite Academy, a luxurious boarding school in the Southern European country of Sauville. Originally from Japan, his jet-black hair and dark brown eyes cause his peers to shun him and give him the nickname "Black Reaper," based on a popular urban legend about the traveler who brings death in the spring. On a day like any other, Kujou visits the school's extravagant library in search of ghost stories. However, his focus soon changes as he becomes curious about a golden strand of hair on the stairs. The steps lead him to a large garden and a beautiful doll-like girl known as Victorique de Blois, whose complex and imaginative foresight allows her to predict their futures, now intertwined. With more mysteries quickly developing—including the appearance of a ghost ship and an alchemist with the power of transmutation—Victorique and Kujou, bound by fate and their unique skills, have no choice but to rely on each other. [Written by MAL Rewrite]