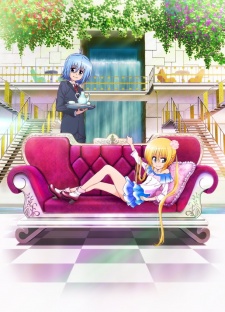 Type: TV
Genres: Comedy, Harem, Parody
Start Date: 2012-10-04
End Date: 2012-12-20
Episodes: 12
Age Rating: PG - Teens 13 or older
Taking place one month after the events that occurred in the movie Heaven is a Place on Earth. Living at the Sanzenin Mansion once again, Nagi returns to her old ways of life, until she receives word from American authorities informing her that she has a week to pick up her late father's belongings that was indefinitely delayed due to various circumstances. After receiving news of her father whom she doesn't remember, Nagi then meets a mysterious girl (with a hidden agenda) claiming to be Nagi's little sister. The series tells a new story that is original to the anime and not directly based on the manga. The main author of the original series Kenjiro Hata personally created the original concept for the story of this anime. (Source: Hayate no Gotoku! Wikia)