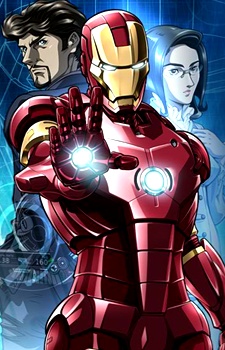 Type: TV
Genres: Mecha, Drama, Action
Start Date: 2010-10-01
End Date: 2010-12-17
Episodes: 12
Episode Length: 24 min
Total Length: 288 min
Age Rating: PG - Teens 13 or older
Tony Stark, CEO of a large weapons manufacturer, physicist, engineer, and brilliant inventor, is wounded by shrapnel from one of his own weapons. While held captive by terrorists, he develops the Iron Man Suit and escapes. From that day on, he vows not to waste his second chance at life and to change the world for the better. For that purpose, he comes to Japan. In Lab 23 in Japan, great strides have been taken to develop, and build, a unique power station which does not run on fossil fuels, the Arc Station. Stark intends to join this project, and, for that, he is ready to announce his retirement as Iron Man. At the same time, he will also announce the Mass-produced Iron Men, to which he will pass on his duties. However, during the ceremonies, Stark is suddenly attacked by combat mecha belonging to an organization known as Zodiac.