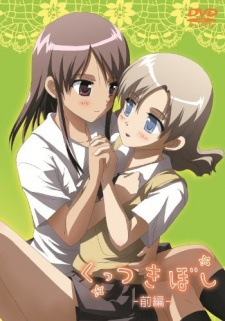 Type: OVA
Genres: Supernatural, Shoujo Ai, Drama, Romance
Start Date: 2010-08-16
End Date: 2012-05-11
Episodes: 2
Episode Length: 22 min
Total Length: 44 min
Age Rating: R - Mild Nudity
To Kiiko Kawakami, there was nothing in the world as important to her as Aaya Saitou. Something about her allured Kiiko to the extent that there was no sound sweeter to her ears than Aaya's voice and no sight more beautiful than her hair softly billowing in the wind. It was for that reason she let Aaya in on her secret: last year, she had gained psychic powers from an accident that changed her life.Kuttsukiboshi is a story of infatuation and romance between two girls as their feelings for one another reach the tipping point. Unable to deny their heartfelt desires, the two give into them and make many sweet memories together around the school—testing the bounds of Kiiko's powers and how far they can go without being caught in the midst of their trysts. However, will things remain as they are when Kiiko discovers the love of her life has a dark secret of her own?