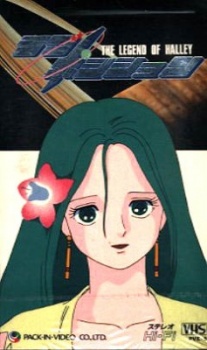 Type: OVA
Genres: Sci-Fi, Fantasy
Start Date: 1985-12-16
End Date: 1985-12-16
Episodes: 1
Episode Length: 93 min
Total Length: 93 min
Age Rating: PG - Teens 13 or older
The very first original animated video produced by Tezuka Productions about an agent who was sent riding on Halley's comet to the Earth. He was actually, though, given the order to destroy the Earth. Captivated by planet's beauty, however, he is no longer able to destroy the planet. Seventy-six years later, another agent from Halley's comet is sent to the earth to liquidate this traitor, who is now disguised as a girl named Lamina in Vietnam. Tezuka Osamu oversaw only the original story. (Source: AniDB)