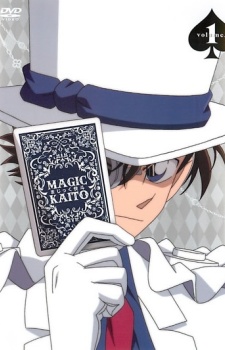 Type: special
Genres: Comedy, Romance, Crime, Adventure
Start Date: 2010-04-17
End Date: 2012-12-29
Episodes: 12
Episode Length: 23 min
Total Length: 276 min
Age Rating: PG - Teens 13 or older
A true magician can fool even the most astute of eyes and deceive the wisest of minds, and there is no magician more talented at magic alive than Kaito Kuroba. Taught the art of deception and disguise by his late father, Kaito spends his days amazing his classmates with his skillful sleights of hand. But when night falls and the moon is out, he takes his performance to new heights by slipping into the role of the legendary phantom thief dressed in white, Kaito Kid.Magic Kaito chronicles the rebirth of the phantom thief of the night as Kaito takes on his father's old mantle. He'll steal rare and valuable gems right underneath the watchful eye of the police, elude genius detectives with daring escapes, and leave the audience dazzled with his magnificent displays... all while searching for the jewel tied into the mystery of his father's murder and the people responsible for it.