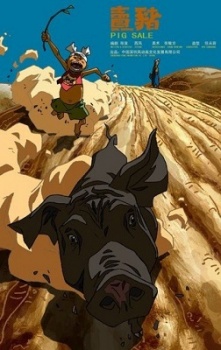 Type: movie
Genres: Comedy, Historical
Start Date: 2012-08-30
End Date: 2012-08-30
Episodes: 1
Episode Length: 11 min
Total Length: 11 min
Age Rating: R - 17+ (violence & profanity)
This short film was inspired by the story told in the prose written by Jia Pingwa to memorialize his father in 1989. Set on the North Shannxi Loess Plateau, the story tells about two boys trying to sell a pig, the only valuable property of the poor family, for food. However, things go wrong. The film was artistically designed to present the spectacular and broad scenery of the Loess Plateau as well as the simple life of the people. This is a black humor about the difficult years in the northwest of China in 1970s. (Source: Youtube, edited)