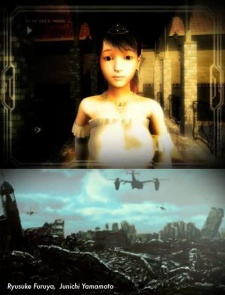 Type: ONA
Genres: Sci-Fi, Military, Slice of Life, Drama
Start Date: 2009-04-01
End Date: 2009-04-01
Episodes: 1
Episode Length: 7 min
Total Length: 7 min
Age Rating: PG - Teens 13 or older
Set in a post-apocalyptic world destroyed by nuclear war, it tells the story of a damaged robot found by futuristic soldiers investigating a devastated area. The humanoid appeared to be household robot, reminiscent of Asimov, and when the soldiers booted it up, they were able to see what was left of videos recorded inside its memory as seen by the robot throughout the years. In just under seven minutes and with no dialogue, the film poignantly reminds us that all our experiences, the things that we hold dear in our lives, are in constant threat. (Source: Bouncing Red Ball.com)