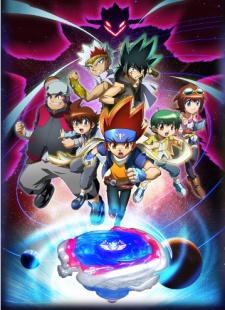 Type: TV
Genres: Sports, Friendship, Adventure
Start Date: 2011-04-03
End Date: 2012-04-01
Episodes: 52
Age Rating: PG - Children
In the Cosmos, an unusual event has occurred. Taking a break from their latest triumph over Faust and the Spiral Core, Ginga and Co find themselves saving a boy named Yuki from a mysterious youth named Johannes. Although Yuki is a boy genius and an astronomer, he is a Blader who owns “Anubius”. Yuki says that he has come to tell Ginga and his friends about the voice of the Star Fragment. He witnessed the Star Fragment (a meteor) fall from the sky one day. That single light dwells within Anubius and he says that he heard the voice of the Star Fragment that evening. A great evil is trying to revive the “Black Sun” and "Nemesis", the god of destruction, by using the unknown power of the Star Fragment and destroy the world. Ginga and his friends must fight again, just as soon as they get the hang of their new 4D system beys! The episode numbers continue from 103.