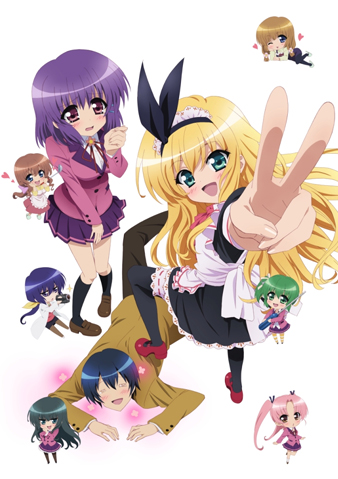 Type: TV
Genres: Comedy, School, Harem, Ecchi
Start Date: 2010-10-02
End Date: 2010-12-18
Episodes: 12
Episode Length: 23 min
Total Length: 276 min
Age Rating: PG - Teens 13 or older
There are twisted tales and twisted tales, but few are as twisted as poor Sado's, who's just realized that he actually likes being made miserable. Of course, knowing that only makes him more miserable, which in turn... well, you get the idea. Desperate to break the circle, Sado volunteers for a special club where he hopes he can work through his issues only to discover that the other members have equally... complex... issues to deal with. For example, the hyper-aggressive club president Isurugi not only has a violent fear of cats, but also believes herself to be a god! Then there's Yuno, who's terrified of men; the Nurse, who forces other people to perform cosplay; and Hayama, Sado's best friend and a compulsive cross-dresser, who's also the girl that Sado is infatuated with. (Source: Sentai Filmworks)