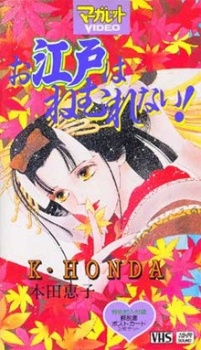 Type: OVA
Genres: Historical, Fantasy, Drama
Start Date: 1993-07-23
End Date: 1993-07-23
Episodes: 1
Episode Length: 30 min
Total Length: 30 min
Age Rating: PG - Teens 13 or older
We are now in the early 18th century, the Kyouhou era, when the merchant culture was flourishing. In Yoshiwara, the red light district of Edo, there is a popular courtesan with good looks and character, called Usugumo. She in fact is a daughter of a Christianized prostitute and a shogun named Yoshimune, but the power struggle in these times doesn't allow her to be with her father. Her fate is about to change when she meets the blond haired thief, Kikunosuke. With Kikunosuke, a doctor named Aoto Touichirou, who uses the yet unfamiliar Western medicine, and her pet cat, Kotetsu, Usugumo forms a thief group, the Kikugumi. In the meanwhile, a member of a mysterious group appears, aiming for Usugumo... (Source: AniDB)