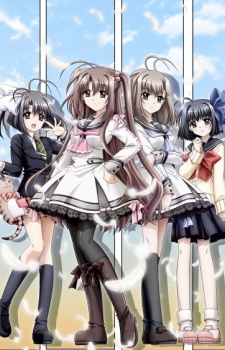 Type: TV
Genres: Comedy, Harem, Drama, Romance, Ecchi
Start Date: 2011-04-04
End Date: 2011-06-20
Episodes: 12
Episode Length: 24 min
Total Length: 288 min
Age Rating: R - Mild Nudity
Haneda Takashi has a secret he cannot speak of. To leave his dull school-life, he was supposed to have escaped to another world. However, he is reeled in by certain ties on his heart. One of these is Kobato, his awkward younger sister. The other is Watarai Asuka, his negligent girlfriend. Chitose Shuusuke is a poor freeloader. He passes his days working at various part-time jobs. One day, he has a disastrous first encounter with Tamaizumi Hiyoko. The next time they meet, Shuusuke discovers that they are fellow employees at his part-time job. Narita Hayato sees himself as a "hard-boiled" person. Back-breaking jobs are nothing to him. Hayato shuns normal human contact, but, during the nights, he would get together with delinquents and other denizens of the night. One such night, he meets the cheerful and oblivious Otori Naru. The relationships with these girls will greatly affect these 3 young men. But what, exactly, is the relationship these young men have with each other? (Source: AnimeNFO)