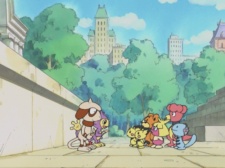 Type: special
Genres: Comedy, Kids, Fantasy, Adventure
Start Date: 2003-07-18
End Date: 2003-07-18
Episodes: 1
Episode Length: 20 min
Total Length: 20 min
Age Rating: PG - Children
This is an animated cartoon that was released inside the game Pokémon Channel. A half-hour long anime show, broken into five short segments, featuring the Pichu Brothers. Meowth throws a party that the Pichu brothers and their friends are not invited to. After a series of events, they find out they were invited, but their invitations were simply delivered late. They go to Meowth's Party and hear him sing. The series has a total of five episodes, each on its own channel. (Source: Wikipedia)