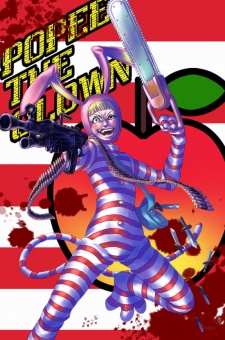 Type: TV
Genres: Comedy, Dementia
Start Date: 2001-01-01
End Date: 2006-01-01
Episodes: 39
Episode Length: 4 min
Total Length: 156 min
Age Rating: PG - Children
Popee the Performer deals with a circus that operates in the middle of the desert. Each episode deals with the small cast of characters attempting at times to rehearse their performances, but it usually dissolves into the characters trying to humorously destroy each other in the usual cartoon manner. The star of the show, Popee, is a clown in an odd red-striped jumpsuit and bunny ears. He is adept at juggling, being a clown, pulling large knives and small bombs out of thin air. He is not adept at ever succeeding in his nefarious plans to hurt his poor assistant or the owner of the circus. His mischievous nature is the driving force of each episode. (Source: animefringe.com)