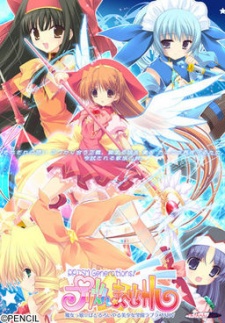 Type: OVA
Genres: Comedy, Magic, Ecchi
Start Date: 2010-08-27
End Date: 2010-08-27
Episodes: 1
Episode Length: 16 min
Total Length: 16 min
Age Rating: R - Mild Nudity
* An exclusive OVA produced for PAJAMAS SOFT 10th Anniversary-Project Prism Magical: Prism Generations! and included with the professional package of the game. There is a small town on the sea. Raika just enjoys his school life with Ibuki, his old friend, and Yuri, his maid. However, his father is actually a magical girl (?). Also, a group of magical girls come to his school to look for a treasure stone called Mana Prism. Though he doesn't want to wear a girl's costume, he is forced to be a magical girl as well! "Come back, my peaceful life!" To save his school, his battle against the magical girls starts now! (Source: AniDB)