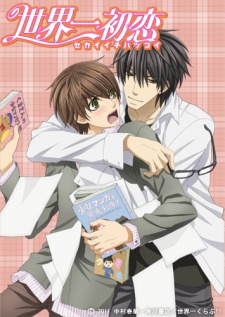 Type: TV
Genres: Comedy, Shounen Ai, Drama, Romance
Start Date: 2011-04-09
End Date: 2011-06-25
Episodes: 12
Episode Length: 23 min
Total Length: 276 min
Age Rating: PG - Teens 13 or older
In Sekaiichi Hatsukoi, Onodera Ritsu is a renowned literary editor, and he's so passionate about his career that he doesn't have much time for anything else. Despite his earnestness, he has to deal with the jealousy of his less-successful colleagues on a daily basis. It all becomes too much for him, so he quits and transfers to Marukawa Shoten, where he hopes to continue his career in a friendlier environment. Unfortunately, instead of being placed in the literature department, he ends up in the shoujo manga division. As if things couldn't get any more complicated in his life, his new boss and editor-in-chief, Takano Masamune, is annoying, bossy and works on incredibly tight deadlines. But that's not all: to Ritsu's surprise, he realizes that his new boss is actually his high school love! Ritsu's new workplace is a lot more complicated than he bargained for.