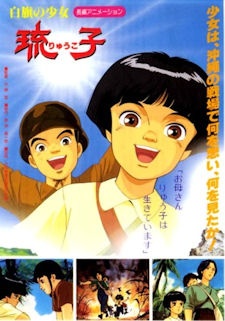 Type: movie
Genres: Drama
Start Date: 1988-07-21
End Date: 1988-07-21
Episodes: 1
Episode Length: 101 min
Total Length: 101 min
Age Rating: - None
In 1945, American troops land on the island of Okinawa. The Japanese fight a guerrilla war against the invaders, and little Ryuko is forced to leave her grandparents behind and flee with her mother and younger sister, who are eventually killed. Ryuko heads on alone across the war-torn island. Eventually she reaches safety in Japanese-occupied caves, only to witness the Japanese troops committing suicide with hand grenades. Based on a children's book by Akira Aratagawa and Hikuji Norima, itself inspired by real American footage of an Okinawan girl, Tomiko Higa, waving a white flag at the island's surrender. (Source: Anime Encyclopedia)