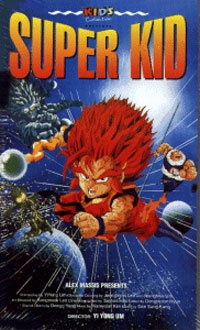 Type: movie
Genres: Sci-Fi, Action, Adventure
Start Date: 1995-01-01
End Date: 1995-01-01
Episodes: 1
Episode Length: 101 min
Total Length: 101 min
Age Rating: PG - Teens 13 or older
It is the year 2023, hurrying for a scoop, Eunjoo, a very active girl reporter, meets Gokdari and his super kids, who specialize in arresting space criminals. The Gokdari's group consists of the best space warriors. Their job is to do good by getting rid of any space rascal. At the right moment they arrest a space monster names Wangdochi and another criminal by locking them in a mysterious golden stick, which is widely reported by Eunjoo. One month later, a police chief and an inspector visit Gokdari and his super kids and asks them to arrest Judogwi, the most violent criminal in space. Judogwi, a 90-foot tall monster, resembling an elephant. This monster is a very violent offender. Carrying a strong energizer bead and equipped with super natural powers. The police offer a reward on this offender's head. Gokdari and his super kids leave for the skull planet where Judogwi lives. They face a lot of danger and difficulties in fighting this monster because of his supernatural powers. They are joined by another warrior, Mio, he takes the energizer bead out of Judogwi and lets it explode by itself. As Judogwi has no power with the bead, all our heroes finally defeat the monster and lock him in the mysterious golden stick. Gokdari and his super kids return to earth and donate their reward to an orphanage.