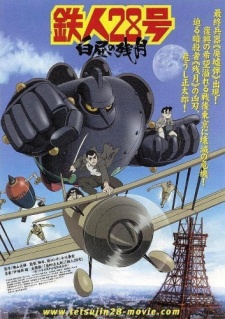 Type: movie
Genres: Sci-Fi, Mecha, Action, Adventure
Start Date: 2007-03-31
End Date: 2007-03-31
Episodes: 1
Episode Length: 95 min
Total Length: 95 min
Age Rating: G - All Ages
This theatrical version based on the manga by Yokoyama Mitsuteru, deals with the genius boy detective Kaneda Shotaro and his giant robot, Tetsujin 28, set in Tokyo ten years after the end of the Second World War. Shotaro's missing brother appears as a a new character who was trained as a pilot of the soldier robot Tetsujin which Japan had created for the Second World War. However, with the end of the war, there was nothing left for him but a peaceful Japan. In the meantime, "Destruction Bombs" are found in many places in Tokyo. The bombs were developed by Professor Kaneda, the creator of Tetsujin 28 and Shotaro's father, as the ultimate weapons to protect the mainland. If the bombs explode, Tokyo will be reduced to ashes.