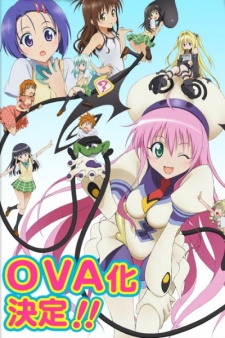 Type: OVA
Genres: Comedy, Sci-Fi, School, Harem, Ecchi
Start Date: 2009-04-03
End Date: 2010-04-02
Episodes: 6
Episode Length: 25 min
Total Length: 150 min
Age Rating: R - Mild Nudity
Episode 01: Rito becomes a Woman Lala invents a gizmo to make her bust bigger. However, this invention of hers accidentally turns Rito into a woman. Episode 02: Rito and Mikan Feeling lonely because Rito is always spending time with Lala, Mikan storms out of the house. While Rito and Lala are out looking for her a few flashbacks from the past, showing Rito and Mikan as kids, are shown. Episode 03: Welcome to the Southern Resort!! Haruna wins an island resort trip for ten females. Rito gets turned into a dog by one of Lala's inventions and somehow ends up on the island as well. Episode 04: Trouble Quest Rito and the girls become trapped inside an RPG game where the objective is to save Lala and defeat the evil witch Kyouko. Episode 05: Nana and Momo Lala's sisters cause mischief for Rito and his harem at a cherry blossom viewing. Episode 06: Draft, Metamorphose, Hand & Tail Yami and Yui confront with a senior, causing Yui to lose her panties. Mikan finds Peke taking snapshots of new clothing while shopping. Suddenly, a stranger steals her bag. As Rito tries to explore Lala's cleaned-up bedroom, he accidentally activates one of Lala's invention, fusing his hand to Lala's tail.