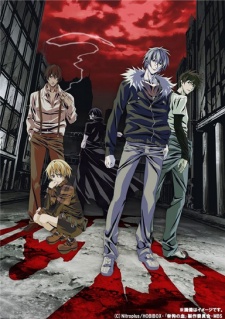 Type: TV
Genres: Sci-Fi, Shounen Ai, Action
Start Date: 2010-10-08
End Date: 2010-12-23
Episodes: 12
Episode Length: 24 min
Total Length: 288 min
Age Rating: R - 17+ (violence & profanity)
A Third World War left Japan devastated, and in these ruins, an organization named Vischio seized control of Tokyo, renaming it Toshima. Tournament style battles called Igura take place on the streets, overseen by Vischio. Combatants murder and fight for the chance to take on the tournament’s king known as "Il-re." This tournament is not the only one around, however. Akira, a young man separated from his family, participates in another known as Bl@ster and is hailed as nearly unbeatable. Though his companions attempt to shower him in praise, Akira is taciturn and indifferent to their awe. Fate has bigger plans for Akira than streetfights, and he finds himself in police custody with a murder pinned on his head. Unable to prove his own innocence, all hope is lost until a mysterious woman named Emma appears, offering him a chance to participate in Igura in order to obtain his freedom.