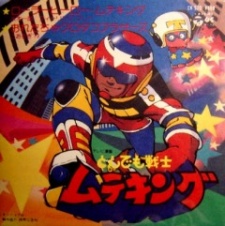 Type: TV
Genres: Comedy, Sci-Fi, Magic, Super Power, Mecha, Kids, Action
Start Date: 1980-09-07
End Date: 1981-09-27
Episodes: 56
Episode Length: 25 min
Total Length: 1400 min
Age Rating: - None
Twelve-year-old Linn Youki loyally supported his father when the world laughed at the scientist for saying that Earth was about to be invaded from outer space. But Linn did not expect to become personally involved--until he met Takoro, the strange young "deputy sheriff" from another world who was on the trail of notorious space criminals. There were only four Kurodako Brothers, but they plotted to use their alien science and natural shape-changing powers to become the secret masters of Earth. With Takoro's help, Linn became the mighty super-hero, Muteking, to foil their schemes. There is plenty of action and laughs in this light-hearted comedy-drama about a roller-skating costumed hero, his friendly but bumbling alien partner, a gang of klutzy would-be world conquerors, a beautiful police chief, an obsessed scientist, a sarcastic dog, an officious flying saucer, and others. This unusual but appealing cast of characters will charm viewers' hearts while it amuses them. (Source: Official Website)