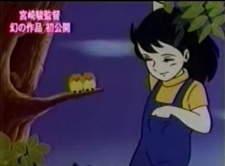 Type: special
Genres: Drama
Start Date: 1972-01-01
End Date: 1972-01-01
Episodes: 1
Episode Length: 4 min
Total Length: 4 min
Age Rating: PG - Children
This pilot is remembered, really, for one notable reason: this is Miyazaki's first time as a solo director. He teamed up with Takahata for the later episodes of the 1971-72 Lupin III series, but Yuki's Sun marked his first time solely in the captain's seat. Yuki's Sun was based upon a popular shoujo manga (girls' comic) by Tetsuya Chiba which was serialized in 1963. It involves a 10-year-old orphan girl who is adopted into a family. The storyline is somewhat complex, and seems to play out like grand melodrama. Chiba's stories were more sophisticated and grown-up than, say, Osamu Tezuka, who of course was the godfather of postwar Japanese manga. (Source: TheGhibliBlog)