Aria is a 6-star unit that plays the Healing and Support role. Her stats and abilities fit her perfectly for this role and make her a good choice for either of the two.

Aria is very similar to Sara in terms of sharing the same dual roles and their move set up. The biggest difference is Aria has no damaging moves what so ever.

All of her abilities and magic are strictly for healing damage or giving support buffs. She is a quintessential White Mage style character.

With her lack of attacks and defense, she’s going to be a Tanks best friend. Being able to keep them alive and just sit behind them letting them take all the damage.

There really isn’t much to say about Aria other than she’s a great pure White Mage.

Verdict: A good White Mage style character. A good unit to pair up with a strong Tank

Aria has a 50% resistance to Water and is neutral to all other elements and status ailments.

Aria can equip 3 weapons and 4 armor.

A young girl hailing from another world where tales are passed down of the Crystals and the Warriors of Light. Aria is a priestess in service of the Water Crystal. When Master Xande uses his powers to flood the world in darkness, the Warriors of Light offer Aria their aid aboard a wrecked ship on the Surface World. Aria then pleads for them to use the Water Crystal to return the world to normal in exchange for guiding them to the Temple of Water. She has no qualms about what dangers may befall her as long as she can complete her mission. 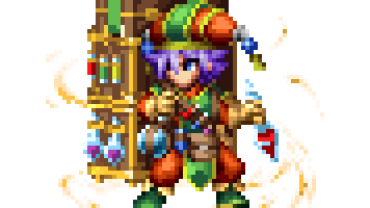