Ashe is a 6 star unit that handles 3 different roles, Physical Damage, Magical Damage, and Healing. She is very good with coverage on all 3 roles with her stats and skills both being setup great.

Ashe’s main attacking skills are a nice balance between Physical and Magic damage. Barrage, Liberating Flash, and Sword of Kings are all very good physical damage attacks that each deal decent amounts of damage.

Northwain’s Glow and Heaven’s Fury are great magic attack moves because of their healing secondary effects. They both deal damage where Northwains Glow heals status ailments and Heaven’s Fury heals HP for a decent amount.

So on her damage to healing ratio her ability to deal damage and heal at the same time is a huge bonus for this character. Definitely something that makes her stand out a bit, aside from having 3 different roles on one unit.

Her Trust Master is also good because of all the bonuses it gives. Def, Magic, MP and Light Resistance all being helpful on her style of character.

She’s also outfitted with 3 Thunder spells giving her the element coverage and dealing some real good magic damage with them. As well as her Limit Burst which also deals heavy Lightning damage.

Ashe is neutral to all elements and status ailments.

Ashe can equip 7 weapons and 7 armor.

A young woman who appears in tales of Ivalice, a world foreign to this one. Ashe is the princess of Dalmasca, a nation that met its ruin at the hands of the Archadian Empire. Although she was officially proclaimed dead amidst all the confusion, she is alive and well. In fact, she has formed the Resistance in secrecy to fight against the empire. Absolutely resolved to avenge her ravaged nation, her father’s murder, and the death of her young husband, she fights on claiming that her actions are for the liberation of her people. 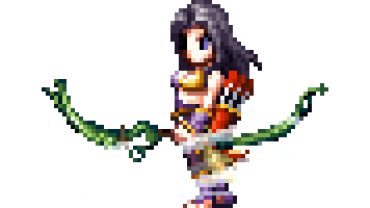