Ayaka is a 6-star unit that plays the Healing and Support roles. Her stats are good for what they’re supposed to be and her skills are simply amazing for her role.

Ayaka is 100% a White Mage character and there is no getting around that. Leaving her alone is a bad idea because even with her decent health she’s gonna be squishy.

But the trade-off to that is her skills being very good healing skills. Each skill that heals recovers with very high aResurgencesurgance raising all KO’d allies being an extremely helpful final skill.

She is just a great White Mage and plays the role to perfection. And the best thing about her is her trait White Mirage giving her a 75% chance to not be targeted by enemies.

Having a White Magic with an ability to avoid aggro is extremely useful and incredibly powerful. Just by having that one trait Ayaka becomes one of the better White Mages in the game and there is no reason not to use her if you got her.

Verdict: A great White Mage character. Definitely use if you have her and are looking for a good healer.

Ayaka is neutral to all elements and status ailments.

Ayaka can equip 2 weapons and 5 armors.

A white mage from the Kingdom of Pharm, she is highly relied upon being one of the few healers from a land full of monks and samurai. She was taught the art of magic by Sakura, and still holds her in high regards as her master to this day. 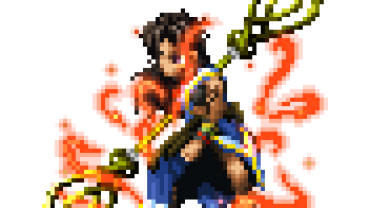