Balthier is a 6-star unit that plays the Physical Damage role. His stats are very good and his skills are all around good for his role.

Balthier has a lot of skills that heavily play in dealing damage and having effects stacked to the attacks. A majority of his skills have up to 2 effects tacked onto them.

Straightforward, this adds to his damage output and can be set up in different ways between his skills that do this. Depending on the enemy and their elemental resistance there are quite a few different damage combo’s that can be thrown out by Balthier alone.

Aside from those he two Break skills, dealing damage and decreasing DEF and ATK. Rapid Fire, which deals 1-6 attacks in a random succession.

And his final skill Killer Shot deals good damage and activates his conditional skill Finishing Blow. So among his skills, Balthier is set up nicely and has a lot to pull from in a fight.

Getting into his Traits it only makes him better. He has traits that cover the right stat boosts he needs, an auto MP recovery, a counter, and an evasion for physical and magical attacks.

Overall, Balthier covers his role perfectly and has a lot of utility in his Traits that really back him up nicely. He’s even got a decent equipment loadout he can use as well.

Verdict: Balthier is a great damage unit it’s as simple as that. Highly recommend him.

Balthier is neutral to all elements and status ailments.

Balthier can equip 6 weapons and 4 armor.

A sky pirate who appears in tales of Ivalice, a world foreign to this one. Balthier is a man who prizes his freedom above all else, endlessly globetrotting Ivalice on his airship, the Strahl, with his partner Fran. A man of many virtues, he nobly claims to steal only from the wicked, although his pompousness and philandering are unbecoming. Little did he know, however, that his plans to steal the treasures hidden within the Royal Palace of Rabanastre’s treasury would change his life forever. 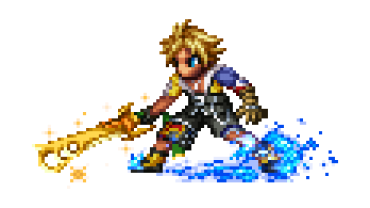