Barbariccia is a 6-star unit that plays the Magic Damage role. Out of the Elemental Archfiend, she is probably the best one of the four with great stats and all around be versatile.

Her skills are very good for her magic based role. A few of them inflicting status ailments like Petrify and Charm which is always very good especially with a 100% chance on Petrify.

She also has good resistance boosts in her traits and the ability Storm Ward. And the skill Refreshing Winds is a heavy duty healing skill that heals over the course of 3 turns.

Sunder is a great final skill that deals good Lightning and Wind damage. And when used after another specific move it follows up with double the damage at 10x instead of 5x.

Her traits give her boosts in all the right places. The trait Aloof giving her 100% resistance to some status ailments is a big bonus.

And in her magic, she had 3 Aero spells and Tornado giving her a huge coverage of the Wind element. All together she is a well-rounded unit with a lot of magic capabilities and some great uses in terms of damage and status ailments.

Verdict: A great 6-star unit, probably the best out of the 4 Archfiends.

Barbariccia is 50% resistant to Earth with a -50% to Light. She is neutral to all other elements and status ailments.

Barbariccia can equip 4 weapons and 5 armors.

One of Golbez’s Archfiends who appears in the tales of a blue planet watched over by two moons. Barbariccia commands the element of wind, and has been entrusted with the protection of the Tower of Zot. When a proposal is made to release a kidnapped Rosa in exchange for the Earth Crystal as per Kain’s suggestion, everyone agrees to proceed with the negotiation at the Tower of Zot. Aware of the party’s movements, Barbariccia works from the shadows to set up the Magus Sisters against Cecil in hopes of being praised for her efforts. 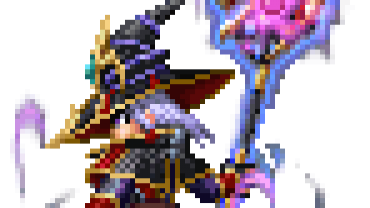