Barusa is a 6-Star unit that plays the Tank and Support roles. His stat’s are pretty good for the Tank role and he’s a Gigant which makes sense for both roles he has.

Barusa is set up well for his role in the abilities he has. Two support spells a heal and an LB boost, two damage blocking skills plus the final skill, and the rest are mainly damage dealers based on the Earth element.

Barusa is built to take a hit so letting him use one of his Support moves and eat some damage is a viable strategy. Afterwards, have him lay down one of his Force Field abilities to take care of the appropriate oncoming damage next turn.

Compared to some other 6 star Tanks or Supports, Barusa does lack a little bit of utility. He does have Adventurer’s Guardian which makes all enemies target him really upping his Tank role.

But aside from being able to block damage or pull aggro, he’s very much a run of the mill Tank. Which isn’t a bad thing, especially with his equipment giving him so many armors to choose from.

Verdict: Barusa is a good unit though can be overshadowed by some of the older and better 6-Star Tanks or Supports.

Barusa has a 20% resistance to Earth. He is neutral to all other elements and status ailments.

Barusa can equip 2 weapons and 7 armor.

One of the heroes from another world blessed by Khalam, the deity worshipped by the people of Olthea. Princess Claire offered asylum to Barusa after he was banished by his people, and thus came to live with her in the palace. However, he was unable to help the princess when she was abducted, causing him to grow ashamed of his own cowardice. It was at that moment that Khalam would bless him. 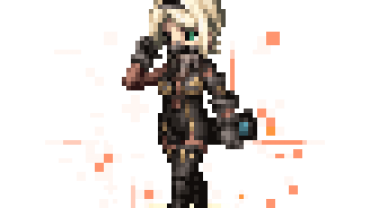