You see where I’m going with this? Of course you do, you read the title already.

So let’s not waste any more time here. We both know why you’re here. These are the 10 cutest dogs in anime.

The one, the only.

Ein is a legend, who supplies a number of sight gags and squee moments as a core member of the crew in the exceptional Cowboy Bebop.

Ein scores immediate points purely because of being a Pembroke Welsh Corgi. But he also is unusually smart, and at different points in the series finds himself driving a car, answering the telephone, playing shogi, and getting high on mushrooms.

This kind of counts and kind of doesn’t. Sadaharu looks like a dog, but is actually an inugami.

Of course, inugami means “dog god,” and is a type of yokai… so basically, Sadaharu is a gigantic mythical dog. I’m counting it.

Sadaharu is best known for chomping on the heads of Gintoki and the crew in Gintama, and it’s probably the cutest blood-drawing recurring gag you’ll see in anime.

Okay, here’s the deal with Koromaru. This dog wields daggers in his mouth. He has a Persona that he summons to fight monsters. He wears an armband.

Also, he’s a super cute Shiba Inu who wears wings on his back and talks to robots.

I don’t know how much more you need to hear before accepting that a dog is totally awesome.

Potato’s primary purpose in Air is to provide comic relief between moments of tear-jerking agony. And that makes him all the cuter.

Hard to say what the breed is, though. Potato honestly looks more like a teddy bear than a dog. But he has the whole “giant puppy head” thing down pat.

While the naming convention used here is certainly questionable, Tetsuya Kuroko sure found himself a cute pup. Tetsuya #2 is the team’s unofficial mascot in Kuroko no Basket, to the point that he has even earned himself a jersey number.

I can’t confirm this for sure, but this might be the only dog on the list whose accomplishments include pooping in one of the protagonists’ shoes.

Pugs may not be everyone’s favorite, but Apo here is hard to argue with. Hibito keeps Apo as a pet at his home in Houston, and named him after the Apollo space mission.

Maru is a stray dog rescued by the male lead of Kimi ni Todoke, Shouta Kazehaya. Because he wasn’t endearing and perfect enough already, he needed to care for a puppy, too.

Maru doesn’t play a huge role in the series, but he helps bring Kazehaya and Sawako closer together through their care of him. And, I mean, look at how much he loves that bone. Really, now.

Look at how happy this dog is. Tadakichi-san, Chiyo’s Great Pyrenees dog in Azumanga Daioh, only shows up a couple of times. But every time he does, he’s this happy looking.

Sakaki, the animal lover, takes a particular liking to Tadakichi-san, because he’s one of the few animals in the series that lets her pet him without biting her. Because dogs are great.

Black Hayate is a surprisingly well-mannered dog, considering he was basically trained through gunfire. I guess anything works as long as you’re consistent.

He is Lt. Riza Hawkeye’s dog, and pretty much does anything she asks, at any time. He sort of resembles a Shiba Inu, but it’s never confirmed. 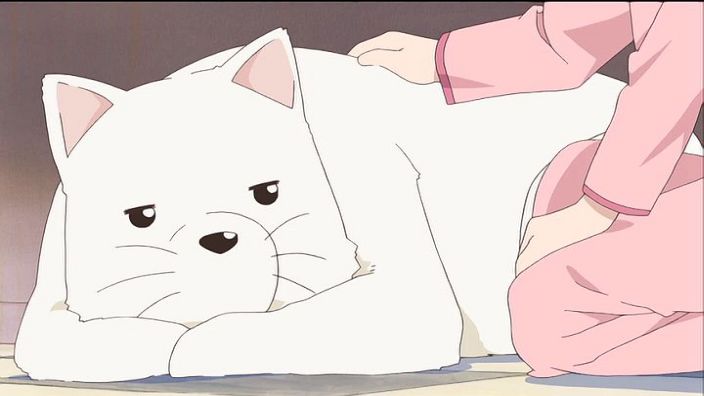 Cherry almost makes the list purely because of it’s cuteness, which depicts a thing every dog ever has done at least once. But it also makes a point – a lot of anime dogs sure are big and white and fluffy, aren’t they?

Like Tadakichi-san, Cherry only features in a handful of scenes in Lucky☆Star. She doesn’t make her first appearance until episode 20, as the house pet of secondary character Minami Iwasaki. Still, her scenes are memorable… even if she does sort of look like a giant cat.