Confessions behind the school. Slight blushes. Chocolates on Valentine’s Day. Dates on Christmas Eve.  Punching a guy through the roof of your house when he does something nice for you.

Ah, love and its many forms in manga. No matter what kind of polygon the love connections are making, it’s always fun to see how it gets sorted out – or how the series ends determining nothing at all.

Well, anyway, here are my picks for the top 10 romantic manga of all time, including at least one or two you probably haven’t heard of – because they don’t have an official English release.

For the record, I’m going to prefer series in which there are actual relationships with real progress, not harem series in which everyone throws their bodies around and then nothing happens. Real romance means relationship progression. Remember that when I don’t list Oh My Goddess. 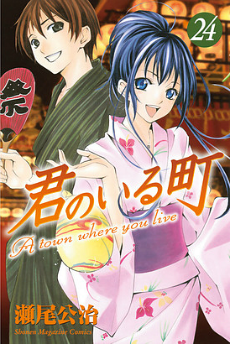 Kimi no Iru Machi, or A Town Where you Live, starts with a fairly common premise.

Boy and girl in high school don’t get along, but have to live together because of reasons. Yuzuki Eba likes Haruto Kirishima, but he likes another girl.

Okay, so far so good, and so cliché. So what makes it special?

Kouji Seo (the mangaka who also created Suzuka) has long been a master of realistic romance, and nowhere does it show up stronger than here. See, the characters in this series not only get into relationships, they get out of them, too. This isn’t a “pure love building up to the first kiss” kind of story.

I mean, how often does your first relationship end up being your eternal true love? Real love takes a rockier path, and Kimi no Iru Machi depicts that beautifully. In a genre full of fairy tale romances, this is a story of two regular people and how they grow together through their shared experiences and their relationships (both with each other and with other people).

The story follows the cast through high school, college, and working life, and there is real character growth in even the most secondary of characters. There are long-distance relationship troubles, messy breakups, broken hearts, and good relationships that just don’t work out for one reason or another. There are awkward confrontations with exes that play out months or even years after the breakup. Likewise, there are relationships that develop naturally and just warm the heart to see.

The story feels authentic, as do all of its characters, and there are tears and laughs to be had for all sorts of emotions. I cannot recommend Kimi no Iru Machi highly enough – to anyone, not just romance lovers. 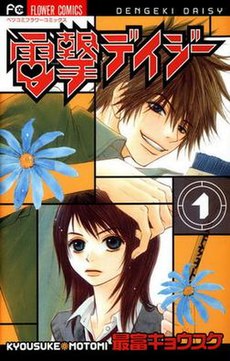 So Dengeki Daisy opens joyfully enough: Teru Kurebayashi’s older brother has just died, and she has no more family to take care of her.

Well, on his death bed, Teru’s brother gave her a cell phone with a contact named “DAISY.” Apparently, this person is going to watch over her in his stead. She contacts DAISY, and so begins a trusting relationship between two people who (probably) have never met. He gives her advice and encouragement, and that’s enough… until she starts digging into his true identity.

Dengeki Daisy is a fun series because you have a romance sort of tied with a mystery. It’s a fairly straightforward shoujo manga, and the big reveal probably won’t blow your mind, but a cast of likable characters carry a well-paced plot forward and keep things enjoyable.

Koizumi and Otani are inseparable best friends, so much that even their teachers talk about them being a comedy duo. And the beginning of the story isn’t about them falling in love – it’s about them each trying to set the other one up with a crush. So at first, you get more zany antics than romance.

But over time, you start to see them grow feelings for each other, and it changes the nature of their relationship. Things that were comfortable become embarrassing, they become more aware of how they present themselves to each other, and so on.

Lovely Complex is probably more comedy than romance, but it’s about a 55/45 split. It’s an interesting story about two best friends trying to un-friendzone themselves, and that premise alone makes it worth a look. 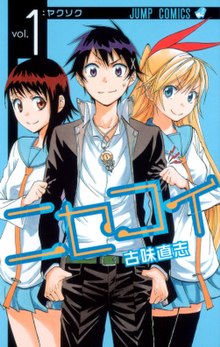 Raku Ichijou and Chitoge Kirisaki have a bit of a problem on their hands. Raku is the son of the leader of a massive yakuza empire, and Chitoge is the daughter of the head of a huge mafia group called Beehive.

And those two factions are on the verge of all-out war.

The solution, of course, is for the two groups to make peace via the two young lovers’ new budding relationship. Of course, the two of them can’t stand each other, but if want to avoid the wrath of their respective fathers and an explosion of gang violence in their town, they’ll keep up the facade.

Nisekoi, or False Love, is not the most unique series in this bunch – it is ostensibly just a harem with only two real relationship options. But strong characterization and enjoyable storylines across the board make it one of the most enjoyable reads in the genre – and unlike most of the series in this list, it’s actively running today. 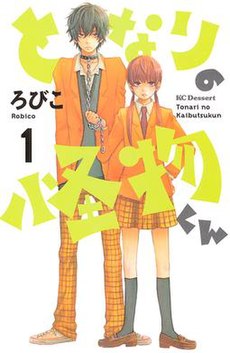 So you have two people who aren’t very social. There’s Shizuku Mizutani, who could care less about anything other than studying. Then there’s Haru Yoshida, an enigmatic guy who seems to not even understand how interpersonal relationships work at all.

Because of their demeanors, Shizuku is known as cold and emotionless, and Haru has a reputation for being violent and uncontrollable. Bonding over their shared isolation, the two become unlikely friends, and things go from there.

Tonari no Kaibutsu-kun, or My Little Monster, is one of those series where the characters go through more development than their relationship, but that in itself is rewarding. These are two characters who need to learn both how to give and receive love and kindness, and by being each other’s opposites, it’s heartwarming to see the way they fit and grow together.