Cedona is a 6-star unit that plays the Physical Damage role. Cedona has some pretty good stats with a good ratio between her HP and ATK.

Cedona has a pretty wide list of skills that deal good physical damage, each with their own difference of purpose. Some of her attacks deal damage and decrease stats, Shield Bash deals damage with a 30% chance to inflict Confusion and Shield Buster having a 20% chance to inflict stop.

Her damage capabilities are great with all the skills that she has. She also has conditional skills that can be activated by her final skill Blade Temperament.

Between her skills, conditional skills, and traits Cedona is a real physical force to be dealt with. Especially in her traits where she has up to 6 Counter based traits.

Aside from her skills, she has 3 magic moves she can use. A wind spell, Protect, and Regen and that right there just pushes Cedona to highly effective use.

Letting her throw on Protect and Regen then just start throwing out attacks while her defense is boosted and healing every turn. Having that on a physical damage unit without needing a support to do it for them is a major bonus.

Verdict: A great 6-star attacker with some small but highly useful utility.

Cedona is neutral to all elements and status ailments.

Cedona can equip 6 weapons and 7 armor.

A female gladiator from Zoldaad who has gained popularity in the Colosseum. Cedona makes her living by fighting as a gladiator, and as such is always in search of a good blacksmith that can provide her with high-quality swords and shields. She was actually so resolved to finding a smith of great talent that she decided to travel as far as the miasma-ridden Gronoa to find one. 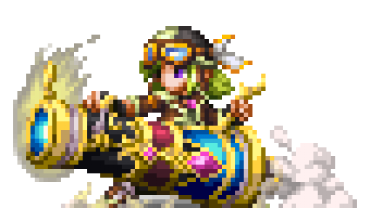