Charlotte is a 6-star unit that plays the Tank and Support roles. Her stats are perfect for balancing these two roles and her lack of skills are made up with her Traits.

Charlotte has 6 skills, 2 of her skills deal damage, and 4 of her skills are for Support building. Especially her final Skill Grandshelt Shield which gives a 50% chance to protect all allies from damage and has damage mitigation chance for 50% physical and 50% magic for 3 turns to the caster.

So going by her skills alone she can be pretty helpful. But her Traits really push her over the edge from how many she has.

Her Traits are really good giving her necessary stat boosts, chance to avoid fatal damage, an auto recovery and a lot more. These Traits are what really push her over the edge as a Tank along with her exclusive equipment Patriot.

She also has the spell Shellga which is a nice little added bonus for her Support purposes. Her equipment is pretty nice especially with having Patriot.

Verdict: A good dual role unit. Possibly a better Tank than Support but can play both nicely.

Charlotte is neutral to all elements and status ailments.

Charlotte can equip 5 weapons and 8 armor.

A knight of Grandshelt on active duty, and Rain and Lasswell’s peer. Charlotte’s stern and austere personality causes her to butt heads with the easygoing Rain, leaving Lasswell to bear the brunt of her complaints about his friend. The anxiety she felt after learning that her two comrades would set off on a dangerous journey was so acute that it materialized into a crystal, allowing those with the power of visions to summon her forth. 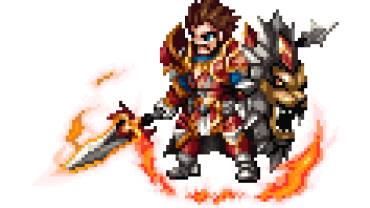