Chic Ariana is a 6-star unit that plays the Magic Damage role. Similar to Dangerous Ariana, Chic Ariana is based on the popular musician Ariana Grande

As a character, Chic Ariana is actually pretty decent. Her stats are well rounded and her skills are slim but good for her role.

These will probably be her main skill attacks outside of her magic. Both of these skills deal decent damage and the added enhanced versions are helpful.

Her final skill Alluring Chorus is just a good magic damage dealing attack. And it’s effect to ignore 25% SPR to enemies helps with its effectiveness.

Outside of skills, Chich Ariana will be focusing mostly on her magic. Having six spells, two Earth Element, two Ice Element, a Drain spell, and Ultima.

She’s not a horrible unit by any means and honestly, makes a pretty good magic user. But being a gimmick character she’s not as powerful as some other 6-star mage users out there.

Verdict: Not the best magic user out there but not horrible either. If you like the artists she’s based off of there’s nothing wrong with using her.

Chic Ariana is neutral to all elements and status ailments.

A beautiful singer from a distant world, whose goal is to bring love and grow peace in the realm. Born as a talented young singer, she started performing from a young age. She became committed to her passion for music and eventually became a popular singer. 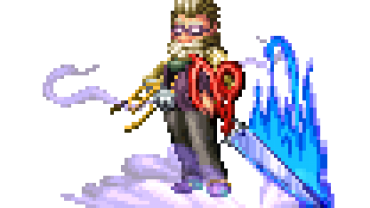