Duke is a 6-star unit that plays the physical damage role. His stats are very nice and skills are a nice balance between base physical with some elemental damage implemented.

The first thing to note about Duke is he’s got great Ice coverage from his skills. Having both Glacier Lance and Blizzaga for damage, and Barblizzaga for ice resistance.

Aside from the good ice coverage he’s pretty well rounded on every other front. His physical damage output is great and most of his moves have secondary effects tacked on them.

Being a Dragoon he has some skills that have the jump delay. These of which are some of his better moves playing true to the Dragoon style.

He also has Lance which is a great HP and MP restore while dealing damage. And he has coverage over Wind and Lightning damage as well as Ice.

One thing to note about Duke that makes him all the more better are his traits Airborne Combatant and Dragoon Spirit. With Dragoon Spirit all his jump attacks do 120% more damage which outright is a good thing.

Verdict: A great damage unit. Definitely, use if looking for a physical damage character.

Duke is neutral to all elements and status ailments.

Duke can equipment 3 weapons and 6 armors.

A young dragoon entrusted with a certain mission. Duke trained from childhood to become a dragoon and has since developed quite a stern personality. Although he serves as the leader of the Resistance, he finds it difficult to fulfill the duties of his post whilst attempting to accomplish his mission. He may be the quiet type, but he cares deeply about his friends. 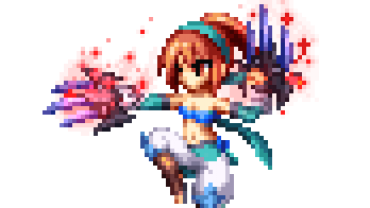