Eiko is a 6-star unit that plays the Summoner and Healer roles. She’s a pretty decent 6-star having a good HP pool for a healer and some high MP.

I’m just gonna be upfront here, Eiko is 100% a healing support unit and there’s no getting around that. She has 2 skills, one being a heal and the other being an LB Boost while both boost the evocation gauge of any esper in the party.

Her magic is where all of her use is and she is highly outfitted with white magic. Having some of the best heals in the game, Raise and Full-life, Esuna and Dispelga, and spells that remove Break effects of all types.

She also has Holy which is a great magic damaging spell. And on top of that, she has Dual White Magic letting her use two spells in a turn.

So you can essentially have Eiko attack every single turn with Holy while using any other white magic spell to buff or heal. So really she is a pretty heavy duty white mage style character.

Her Limit Break is just as good being a good heal and stat break remover while also effecting evocation again. Overall, she’s a great little healer.

Verdict: Really good healer. Definitely use her if you’re looking for a unit to fill that role.

Eiko is neutral to all elements and status ailments.

Eiko can equip 4 weapons and 4 armor.

A descendant of a village of summoners who appears in tales of Gaia, a world foreign to this one. Eiko is the sole remaining survivor of the summoner village known as Madain Sari after it was wiped out by a disaster 10 years ago and sports a horn on her head as proof of her summoner origins. Following the loss of her family, she remained in the village accompanied only by moogles. A cheerful and precocious child, she survives each day by stealing food from others with the help of her moogle friend Mog. 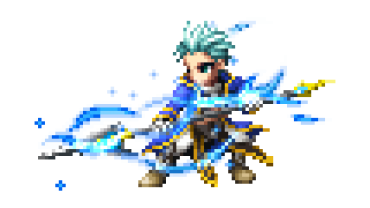